I wandered through odd, fractured dreams in the early hours just before morning.

Through a house filled with tall windows and hazy shadows, peeling frames and ancient oak doors, all in silent elegant decline. And of a figure who darted with quicksilver fluidity, hunting among rooms until he located me - tugged my hand, and pulled me out and into the night.
A man of indeterminate age and changeable features. His appearance altering subtly from moment to moment - as if a series of paper-thin masks fell constantly from his face - before finally settling and solidifying. Dark, tangled hair in unruly waves and a face carved with lines and age, ice-blue eyes. Almost a mid-aged Lou Reed. Puck-like, elemental, unfamiliar - both intense and almost-frightening, yet compelling.
He led me - half-protesting, half-intrigued - on some gravity-defying whistlestop tour through morphed buildings and distorted warehouses, through swinging doors and out into the black. And all the while hurling out aloud a constant monologue - thoughts on philosophy, theosophy, physics - theories and concepts beyond my understanding or ability to absorb. It seemed I was charged to listen, to bear witness - but I could not keep up with the furious intensity and urgency of his thinking.

He was a God. And one of many.
It was understood (as it is, in the logic of dreams - where things are understood and absorbed almost by osmosis) - and there seemed to be no reason to question this.
There could have been something of Anansi about him, with his bright intense eyes and quick grin and fluidity - but he appeared more feral and less polished than the charming Caribbean deity. With something furious boiling just below his skin, as if a strange furnace burned deep in his bloodstream.
Loki, perhaps. 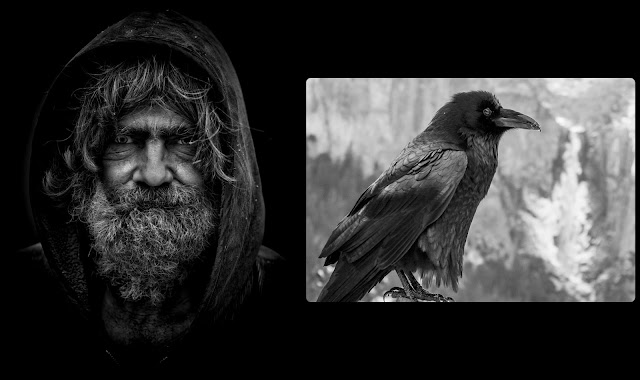 We eventually paused at a vast, swiftly-flowing orange river, where burnt amber skies raged above, and black skeletal seedlings clung to the bank. In spite of the disquieting atmosphere, it felt oddly serene and somehow tranquil.
He and his kind were sustained by the river, he told me, and he dipped his hand and drunk from its waters.
When he gestured for me to do the same, I also dipped my hand, and drank.
But where he was visibly rejuvenated by the waters, to me it tasted slightly soured, and tart - the taste of overripe berries stinging my tongue. It did me no harm, but neither did I enjoy it.

Somewhere shortly after, I woke abruptly in the dark, disorientated and confused - with Bod at my feet, a reassuring warmth and solidity. He stretched languidly, purred, and settled instantly back to sleep.
But the skin of my feet stung with a lingering sole-print - the ricochet of thundering steps as we'd run through night. And hours later, the urgent stream of thoughts and theory still swirled and spun in my head.

Earlier that day, while walking into the city, I'd passed an old man at the end of my road, feeding pigeons.
He was stooped and bowed, dressed in a too-baggy dark coat and frayed-edged trousers. There was a strange serenity about him, standing almost statue-like on the street, amidst the dry gusts of small wings, a cloud of grey and cream. He had his back to me and his face hidden, only a wisp of white cobweb-hair visible. Birds alighted on his shoulders and arms, and gathered, strutted and fussed at his feet.
Birdman.
Memories of David Almond's extraordinary novel Skellig jumped instantly to mind - of Almond's ancient, owl-or-angel creature, hidden and abandoned, covered in dust and cobwebs and forgotten years, fractured wings secreted under his threadbare black suit.

And I wondered what lay under the old man's too-big coat. Perhaps something more than hunched shoulders and a bowed back and a slowly-crumbling spine. Or perhaps not.

All dreams and reveries, I know.
My over-active brain and imagination piecing together scraps of fleeting images, voices, thoughts, stories from my subconscious and forming them into a whole - if somewhat distorted - new narrative. I've spent much of my life immersed in books and tales, and informally study traditional folk tales and mythology - as well as contemporary re-tellers. So my imagination has plenty to work with each night.

But, perhaps, as Neil Gaiman has it* - perhaps the old Gods still linger - kept alive by a handful of faithful believers and tiny pockets of faith.
And maybe the old, almost-discarded deities still gather to quietly feed city-pigeons, to recall the gust and waft of air under mighty wings.
Or to wander through the dreamscapes of mortals, out of curiosity, boredom or desperation....to toy with them, idly....to attempt to impart knowledge....or simply so they will not be entirely forgotten.