The girl and the bear who returned the stars to the sky. 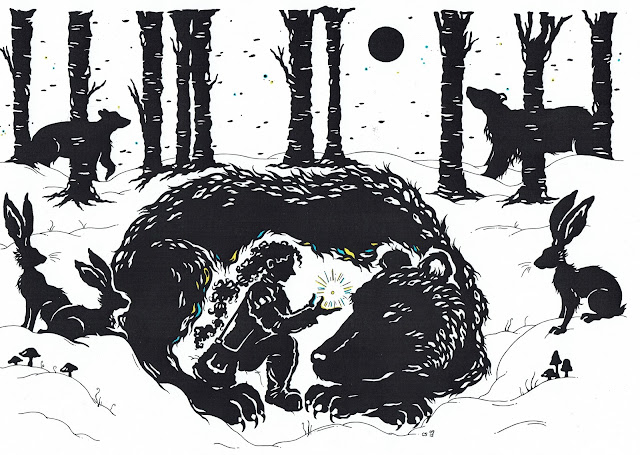 This is the story of a girl, and a bear.

A girl with impossibly curly hair, and an immense black bear.
No-one knew where they came from, or how or when they met. No-one could remember a time in which the two had not been inseparable.

This unlikely pairing spoke little, but moved together as if as one. Their shadows blended and intermingled. They drew in and exhaled the same ice-chilled air.
The child's spiralling hair was as deep ebony as the bear's dense coat, and their eyes bore an identical amber hue.

Elders and old folks muttered amongst themselves as the child and the bear passed over their lands.  With narrowed eyes the wizened ones whispered of guardians, of spirit animals, of souls leaping from bodies and dividing themselves asunder, of the pieces of fractured soul taking corporeal form.
But no-one knew with any certainty.
And so the pair were left to their business, and the old men to their dusty murmurings.

They covered continents and lands, mile after endless mile.
Together the child and the bear travelled the the world, and together they returned fallen stars to the sky.

As the stars shot downwards - searing alight the atmosphere and crashing through the heavens, tumbling and tossing and twisting - the pair would watch the skies, and mark the illuminated path.
And then with grave intensity, she  would gather together their few belongings.
Again and again they would embark on new journeys to unfamiliar lands - over snowbanks and dried parched plains, mountains and ranges. Until they reached the star.

Often embedded deep into the earth or underwater from the sheer force of the fall, the celestial bodies would still glow with a faint and delicate grace. The girl would gently lift the fragile star free - and they would depart.

That night, as the darkness huddled round their shoulders, blanketing and covering the world, the bear would wind itself around, curling into a tight ball of dense black fur, with the child curled by its chest, the star cupped lightly in her hand.
Nothing was said. The two sat curled together, intently watching.
Slowly, slowly, the double, conjoined rhythmic pulsebeat of bear and human heart warmed the stars. Slowly, light returned. Slowly, sparks of azure blue and deep gold began to illuminate the girl's fingers. Until - revitalised and almost blindingly bright - the star flamed alight once more, and  flew back to its rightful place in the sky.

They continued their tireless task for year upon year - the child growing into womanhood, the bear into maturity. Countless stars were located - and each coaxed back to blazing life by the steady and thunderous beats of two intertwined hearts.
They continued until old age crept stealthily up and found them, once-dark tresses and pelt turning to silver, their joints aching and eyes clouding.

The ancient woman and the venerable bear were last seen slipping away like silverthreaded shadows, into the darkness one winter evening, into the silence and the snow.

Some say they were found the next day, frosted with ice and lying so completely still. White hair and grey fur flowing into each other, a massive paw gripped tightly in a small hand. Two companions bound together in a fiercely devoted friendship - in death as in life.

But others say the two followed the last star into the skies, and there they became bright  constellations.
You can look for them on winter nights, for they are indeed there - burning with their own quiet, proud flames.

and they loved each other
suspended on a thread
of snow

This was drawn for my friend Rita, who said all sorts of kind things about my artwork, and who requested a picture of her own.  She asked me to draw anything I wished (within the folk-tale-universe, and in my silhouette style). So I did.

This little story and characters have been rolling round my head, half-formed, for a long while now - and it was Rita's open invitation that finally focussed it.

But a great many pre-existing stories and artworks fed into the idea, including.....

East of the Sun, West of the Moon (one of the oldest, and best bear-and-child stories I know of)....

Jim Henson's Storyteller - and particularly the poignant bond between heroine Anya and her loyal lion companion - and their epic journeys 'over cliff and cavern, crevasse and chasm, cave and canyon....' - and onwards....

Everything about Jackie Morris' bears.
.... And her hauntingly beautiful modern re-interpretation of East of the Sun, West of the Moon

... and it has been some years since I read it all, but I am certain that I owe a debt to Philip Pullman, whose stunning Northern Lights trilogy - and his glorious tales of armoured bears, of extraordinary lands, and of children and their animal dæmons - have long lingered in my creative unconscious.

And, as ever, music has played a hugely important part in this process. Of Monsters and Men - with their fable-like sweeping songs - wound a deep vein that flowed through this piece (with this melody in particular..... and with this one too.)
And they were interspersed with the deliciously dark and subversive cabaret-like performances of Gavin Friday - and the intricate, poetic raw verses of Patti Smith.
I am immensely grateful to them all for sharing their beautiful music and words with the world.

~ Of Monsters and Men

Posted by Cate Simmons at 06:14 No comments: