(Please note: this is the second part of  a story - which I begun here...)

This is a re-telling of a story from Africa. In researching the many revisions and versions of the tale, I realised how widely-told it seems to have been - the fine details changing each time, but the essential storyline and moral remaining the same.

There seems to be some debate as to which particular African country the story originates from - although Zimbabwe seems to be the most agreed upon - so I have tried to remain true to this in the elements of my illustration design.

I originally came across the story in Alexander McCall Smith's delightful The Girl Who Married a Lion: Folktales from Africa collection - which is enchanting, and beautifully illustrated by Naomi Holwill - and is very much recommended. 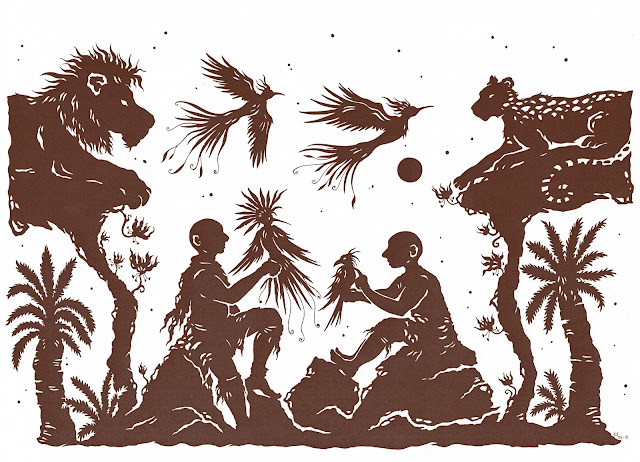 And so Hamunda and Akashinga set off in search of the magnificent and elusive bird.

The journey took many days. Sunsets and moonrises ascended and fell. Mile upon mile was walked.

In spite of Akashinga's initial skepticism, it was Hamunda's gift of sharp hearing that kept the two men safe and unharmed as they travelled. Hamunda was so accustomed to moving quietly across the world that his sense of hearing had grown acute, and keener than most. He heard the soft whisper of a leopard's footfall in the distance long before Akashinga could spot her. He anticipated the deep thrum of an approaching rhino, and the oncoming rumble of a startled herd of wildebeest.

When they arrived after a time at an innocuous bare plain, where Hamunda sat gently down, Akashinga was confused. There were no birds – or any other beasts – in sight. But Hamunda reassured him, and ushered Akashinga to silence - albeit an unwilling one.
And so they sat.  And they waited.
Occasionally Akashinga would shuffle or interject into the stillness with a query or objection, but each time Hamunda would raise a patient finger to his lips, and smile, motioning him to silence once again.

They sat that way for some hours, the two men. Still and silent and meditative – one scowling, the other smiling gently.

Until the songs began.  Distant at first, and then closer and closer they came.
The men raised their heads and found the sky was suddenly painted with broad strokes of melody, with sweeps of harmony and layers of allegros.
And then followed the birds - sweeping and wheeling and diving in clouds and streams. Billows of greys and browns, speckled and striped and spotted. And amongst them swooped birds that blazed in deep blues and set the sky alight with their crests of gold, trailing feathers that whipped the clouds behind them.
Their songs gathered and grew into a joyous crescendo.

They whirled and curled around the men, greeting them with curious inquisitiveness.  They were long-familiar with the sight of Hamunda, who nestled with them in the branches of the baobab tree, or who wandered for days to sit among the plain and hear their song.
And so, slowly, they settled around them, fluttering and cooing contentedly.
A small cinnamon-hued bird hopped along the length of Akashinga's arm and onto his shoulder – her bright brown inkdrop eyes examining him with undisguised interest. And onto Hamunda's outstretched hand settled with a flourish the most splendid of all of the birds – with a huge sweeping crest and sapphire plumage, bright and radiant against the sun-bleached earth.

Akashinga looked from the speckled buff feathers of his new companion, to the glorious cerulean azure of Hamunda's bird. And back again.
A frown drew across his brow, storm clouds shadowing his eyes. But he said nothing.

These birds will sing for us, Hamunda explained to his brother-in-law – but they cannot be caged. They sing of their freedom and of the warmth of the air and the swoop of the wind beneath their wings. But if they are imprisoned or locked away, their song will cease, they will pine and they will swiftly die. You may carry the bird home with you, to sing briefly for your wife – but then you must grant her freedom again. You promised me no harm would come to the bird, Akashinga. Will you keep your promise?
I will, nodded the hunter.

But the cloud that had settled over Akashinga's eyes would not pass. He muttered and grumbled to himself, exasperated and furious. How could life be so unjust!? His bird – although sleek and beautiful – could not compare to the luscious beauty of Hamunda's. Why should he go without? And what good could such beauty be to a blind man, who did not have the ability to fully appreciate it?

And so that night - with the stormclouds swirling in his heart, fogging his head - he formed a plan.

When the moon had risen and the  stars pricked the sky alight, Akashinga crept on hushed hunter's feet to where Hamunda lay curled up sleeping. And with stealthy silence, he swopped one bird for the other - leaving his speckled companion behind, and lifting the cobalt blue bird onto his arm. The startled birds fluttered and flapped for a moment or two, when roused from their slumber, but Akashinga held the blue bird firmly, and it settled calmly under his grip. He returned to his own blanket and curled up happily, the storm clouds blown clear away. And he smiled as he slipped into effortless and restful sleep.

They made camp for the next days and nights under the protection of the sweeping baobab trees, and in quiet ravines, where wild flame lilies curled and blossomed.
The birds were contented, fluttered and grooming each other, taking short flights and then settling back down to take rest with the two men who fed them seed and berries, and stroked their breasts. Hamunda tended to the cinnamon bird, and Akashinga to his azure-streaked companion.

The next morning, they set off at sunrise for the final stretch of their journey.
Akashinga beamed as he walked, proudly holding aloft the crested bird, which was perched contentedly on his wrist. He was the best of hunters, the strongest and boldest of men - and now he carried home the largest and most grand of prizes! How proud his wife would be!
Hamunda smiled his gentle smile, but said little. He stroked the brown bird, which sung its intricate melody quietly to him – and guided them slowly home.

A few miles from home, the men made one final rest. With villages in sight, their talk now turned to daily life, to family and friends. And to the frictions and ruptures that had boiled and roiled for years between neighbouring tribes, and the heated – and sometimes violent – divisions that had followed.
Akashinga sighed. He turned to his brother-in-law, sadly.
'Why do men hate, Hamunda? Why must they fight?'
Hamunda turned his blind eyes to Akashinga's, his face grave and sorrowful.
'For many reasons... Because of long-forgotten divisions... because they are afraid... because they are hurting....because they are confused or broken.'
'...And sometimes because they break trust with each other. As you broke my trust when you stole my bird three nights ago, and traded it for your own.'

Akashinga's face blazed with heat. He stammered and struggled and flustered – and then hung his head in shame.
'I am deeply sorry, brother,' he sighed. He touched Hamunda's hand tenderly.' I was selfish and unkind and ungrateful. Please – take your bird. And, if you can one day find it in your heart, I hope you can forgive me.' And he handed the regal bird back to Hamunda.

Akashinga walked slowly away, his cheeks burning, his heart bursting, a mountain of remorse hung upon his shoulders.
Then he stopped and turned, and called back.
'And.... how do men come to love each other again?' he asked, in a small voice.

Hamunda drew himself to his feet. He walked over, and took his place by Akashinga.
He ran his hand softly across the lines and furrows of his brother-in-law's face, gentle and compassionate and kind.

'They do what you have just done, for me. And then they forgive each other.' he replied.
And took Akashinga in his arms, holding him tight.

The two men stood that way for a time, locked in a hushed and sturdy embrace.

And above them, the bird of cinnamon and the bird of azure whirled and curled though the hot air, and sang of their union, and of the joy of brotherhood and forgiveness.
And once again sung of the wonders and the glory of their Africa.
Posted by Cate Simmons at 04:15 No comments: