A couple of weeks ago, I started compiling a list of the small things that had made me happy, and kept me afloat. It turned into a blog post.
I so enjoyed doing it, that I started to do another - I have some days that are easier than others, and have been fighting a depressive/exhaustive illness most of my life - so on the harder days, its been enormously helpful to come back and flick through a list of small things that have brightened me.

I write these posts for my own enjoyment - and (as Caitlin Moran once wrote), for the pleasure of pointing at things I like.
Then I read this extract from the wonderful Betsy Greer's post on social media 'counts' and popularity:

We feel embarrassed when we post something that gets very few likes, especially if we were truly enamored with the photo or thought. We mistake the silence, which doesn’t mean you’re a failure, but that perhaps your friends are busy cooking a delicious meal, your cousins are at a movie, and your Mom is taking a nap. And in letting this affect us, we’re changing who we are to become people sharing for validation, not because we want to connect.
So what if we reframed the silence? And didn’t think any less of ourselves because of it?
The great thing about the internet is that we don’t always know who’s looking at our posts, especially if we’re using social media, as we don’t own the stats. If we post what makes our hearts sing, a lonely teenager in Greenland may find it and find solace and someone else may beam at a memory that your photograph evokes. If they don’t comment or like, that doesn’t mean they didn’t like it or didn’t see it… but we discount all those non-commenters by only caring about the ones who did comment. We discount their very experience with our content.
...The internet needs good content amidst the fluff. We need you for who you are, not on a projection of you solely based on likes. We need you to be a beacon someone can cling to when they feel all alone or the answer to someone’s problem or the reason someone smiles. We need you to show up despite the possible silence. We need you to strive to put out content that makes people think, without caring about the response. We need you to make good content, tag it well, and fall in love with it because it’s good. And because you never know who it will find or help.

She's absolutely right. I'm just as guilty as anyone for checking in on my Facebook 'likes' and blog stats, for feeling a certain disappointment when posts/links I write up don't get the reception I hoped for. But it's always worth keeping posting the good stuff, as you never know who may stumble on it - or when it might be found. And because it's entirely you. We should write and draw and share simply because its an expression of ourselves, then throw it to the wind - and let it fly.

Post script: After reading this, Betsy's point was proved in full. Someone left a comment for me, on a picture of mine that they'd just found - that I'd posted to Flickr over eighteen months ago:

love love love the dude in the wheelchair with the wings ... reminds me of my 9-yr old daughter and her chair. its quite rare that we see fantasy or heroic images of people in chairs, so i'm going to be quite pleased sharing this one with her. =)

Posted by Cate Simmons at 01:47 No comments:

A blind man catches a bird: Part One.

...That was how the world was made, how the void was divided, how the lands and the stars and the dreams and the little gods and the animals, how all of them came into the world.
They were sung.
The great beasts were sung into existence, after the Singer had done with the planets and the hills and the trees and the oceans and the lesser beasts. The cliffs that bound existence were sung, and the hunting grounds, and the dark.
Songs remain. They last. ...A song can last long after the events and the people in it are dust and dreams and gone. That's the power of songs. 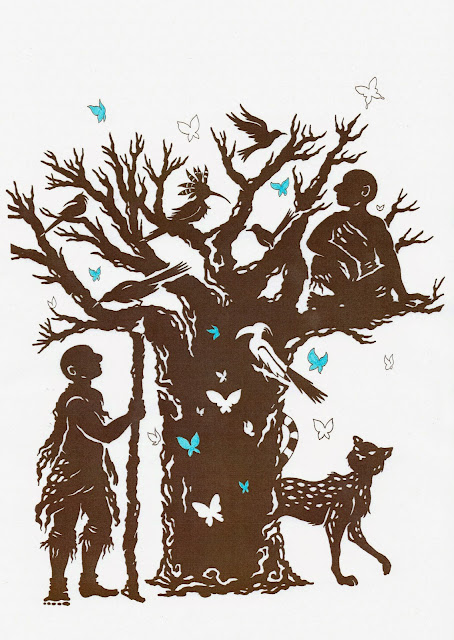 Some years ago, there was a man who lived in a small village in Africa, with his family. His name was Hamunda.
He had been blind from birth - but this did not prevent him from living a full and contented life. Hamunda was a gentle, thoughtful man, who possessed that rare quality of great stillness, and who moved with lightness and dexterity across the world.

When the day was still and hushed, when chores were done, and there was little left to do, Hamunda would take himself away from the clamour and chatter of the village.
He would clamber up into the limbs of a sweeping baobab tree that rooted nearby, trusting his fingers and the familiar sweep and curve of the sturdy branches to find his way.
And he would sit there for a time.

Others in the village chided the blind man for sitting in the branches of the baobab tree and doing nothing. But he did not care.

Hamunda sat in peace and felt the solid strong trunk of the tree against his back, and the roots below anchor themselves deep into the red earth. He felt the soft caress of butterfly wings on his skin as they fluttered around the tree or settled noiselessly on his arms or shoulder.
And he listened. To the sound of the wind as it lifted the dust from the ground, and curled it into lazy spirals before dropping it and tossing it aloft and beginning again. He listened to the distant rumble of rhino herds and the majestic cry of elephants. To the almost-imperceptible pad of velvet lioness paws, as she stalked her unwary prey.
But mostly, he listened to the birds that roosted in the baobab tree, that swooped through the branches, and watched the butterflies with idle curiosity.
The birds sung songs of their Africa. They sung of the endless flat sun-bleached plains, of the wandering herds. Of the reaching branches of the huge baobab trees. They sung of the gods who had first formed the land, and who slumbered still, unseen. They sung of the richness of scarlet sunrises and golden dawns, and they sung the country back into existence, again and again.
And Hamunda was still amongst them, and listened in respectful silence - and so the birds also sung to him.

One day Hamunda's brother-in-law -Akashinga - came to find him while he sat in solitary peace, in the arms of the baobab tree.
Akashinga was a bold man - a hunter, a warrior and the strongest in his family. He knew of Hamunda's affinity with birds, and, although the habits of the man confounded and confused him, he came to seek his help.

'Brother,' called Akashinga - 'I wish to find a bird, which I'm told roosts in trees not far from here. The bird is renowned for its beautiful feathers and its wonderful song. I wish to present it to my wife - so it can sing its songs to us, so it will enchant her with its beauty, before we set it free to fly once more. I have hunted and cast my nets and set my traps, but I cannot ensnare the bird. The others in the village tell me that only you could find the bird.
I promise to not harm it, Hamunda. I promise to set it free.
Will you help me?'

Hamunda sighed. And he thought.
And because he loved his sister, and because of the firm promise that no harm would come to the bird, he agreed. He carefully climbed down from the baobab tree. And off they went - in search of the bird, and its extraordinary song.

This is the first of two parts of a story for a collection of re-written world folk and fairy tales, that I'm currently working on.... part two will follow.... :)
Posted by Cate Simmons at 11:11 No comments: