On Nick Cave and creativity.

In the early hours of yesterday morning I dreamt and found myself front row at a Nick Cave gig.
It took place in an battered amber-beamed barn, with sawdust floors and tumbleweeds floating in corners. Everything was wooden and solidly sturdy and particularly tangible in its comforting roughness. All was old and weather-beaten and the light took on the hue of soft fire.
When he stepped down from the stage and out into the throng, he took hold of my up-stretched hand and held it.
Pale palm, long fingers.
His touch was cool, not cold, and his grip firm and steady.
Although I expected the connection to be fleeting, he didn't let go.
I took some of his weight as he stepped from the stage. The crowd rippled and shifted as he moved through and among us all - and still he sang.
The dream slipped and shunted then, and the crowd was gone, revealing a half-empty timber bar at one end, with rough seats and low lights and gentle murmurs.

We sat and simply sipped a beer and talked for a time, the two of us, quietly and still. About life and work and art and hope.

Very little remained with me on waking, but scraps of images - amber ancient wood and low ceilings, of that pale strong hand, of a steady, astute blue gaze. 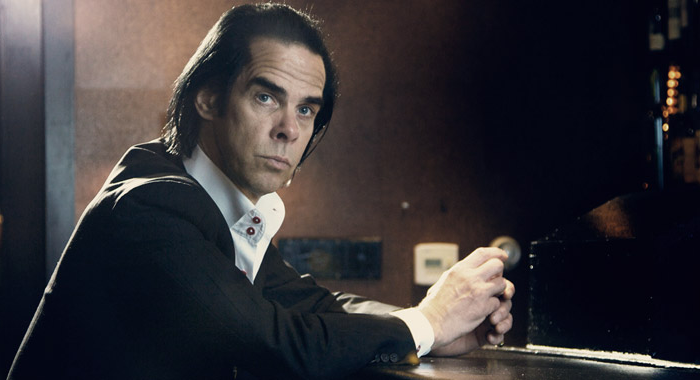 And of fleeting sparks of conversation about the alchemy of imagination and inspiration - and of the essential necessity of keeping on creating.

you've got to just
keep on pushing
push
the
sky
away

The dream returned slowly through the day, thawing gradually through my consciousness. I flicked through some of Nick's film 20,000 Days on Earth later that afternoon, and I think somewhere within his penultimate monologue I can find the essence of what we discussed and considered while I slept:

'All of our days are numbered. We cannot afford to be idle. To act on a bad idea is better than not to act at all. Because of the worth of the idea never becomes apparent until you do it. Sometimes this idea can be the smallest thing in the world. A little flame that you hunch over and cup with your hand, and pray will not be extinguished by all the storm that howls about it.
If you can hold on to that flame, great things can be constructed around it - that are massive, and powerful, and world-changing.
All held up by the tiniest of ideas.'

Yes, indeed.
Small beginnings sparking great and beautiful acts of creativity.
And how we owe it to ourselves to 'write or draw or build or sing or live as only you can', as Neil Gaiman once wrote.

I'm going to let myself be sung to sleep by Mr Cave tonight, and be washed along on the ever-rising waves of Warren Ellis' soaring violin.

And tomorrow I shall draw some more.
And keep on creating and nurturing that tiny flame.

Posted by Cate Simmons at 00:52 No comments:


A very happy birthday to you, Mr Adolf Marx.
(Also known as Arthur, and, most commonly, as Harpo).

Of all the people I admire - and wish I had once known - you remain my favourite.

Harpo was a pixie-like person... a giant pixie.
Dogs and children would come to him as he got into a room... he absolutely was a saint.
~ Norman Krasna


Harpo possessed all the good qualities of our mother. Kindness, patience, affection. I got all the rest.
~ Groucho Marx ... Harpo comes now. He fell from heaven in his topper and his raincoat. He can't speak, you see, but he has his honker in his belt and he paps it to tell us his thoughts. What's he doing now? Feeding a horse with flowers. He has found a harp, though, he always finds a harp. He will roll up the sleeves of his raincoat and will play the harp now. He's playing it! His great white hands spread and strum and cup and pluck and flow amazingly swiftly all over the strings. His thumbs run round in a blur of swoops and circles and God's music overwhelms and astounds us as his angel tells his message. 'I love you,' tells his messenger in the topper and the raincoat with the honker in his belt. His face is serene, powerful and lovely, his wide eyes closed to be peaceful as with joy he plays his harp.
~ Peter O'Toole (The photos used above were found here... here...here...here - and at Bill Marx's beautiful tribute site for his father: Harpo's Place)
Posted by Cate Simmons at 02:01 No comments: